How to Overcome Public Speaking Fear and Anxiety 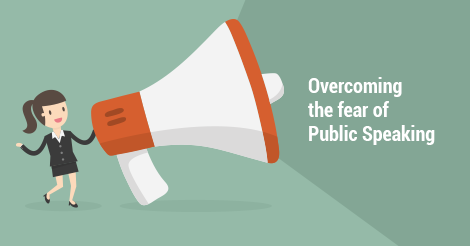 Public speaking fear and anxiety is not easy to overcome, but with training and practice, impossible is nothing, isn’t it?

➥ The first thing you need to do is to eliminate the fear of getting laughed at or rejected. Sometimes these feelings can be hard to overcome, but as difficult as it might be, it’s the most important thing to do.
➥ Organize your speech properly, and practice hard. So that, when delivering the speech, you do not fumble for words and have complete control over what you want to say.
➥ You need to calm yourself. Communication skills trainers often stress on this aspect. Take some deep breaths to calm your mind and body, train yourself to not feel anxious when addressing an audience.
➥ If possible, read a newspaper report or a magazine article in front of someone you know. Think of it as a trial for your public speech. It might yield valuable results in controlling the fear.
➥ Do not pay much focus to how the audience is reacting to your speech, if that makes you tense. Focus on your speech and concentrate on delivering it as well as you can.
➥ If you do care about the audience, engage them in your speech. Make jokes, lighten up, and enjoy the situation, instead of dreading it. The lighter the situation is, the easier it’ll be for you to overcome the anxiety. Nobody gets tensed in a friendly atmosphere!

The importance of overcoming fear and anxiety is invaluable. Personality development trainers deal with helping people overcome this aspect so that it doesn’t hamper their professional aspirations. The better you’ll get rid of it, the more confident you’ll be to deliver a speech in front of a big audience.

Do you have a question? Or do you need support for your projects? Don't worry, we are here to help. Please use contact form below for support, feedbacks and so much more.